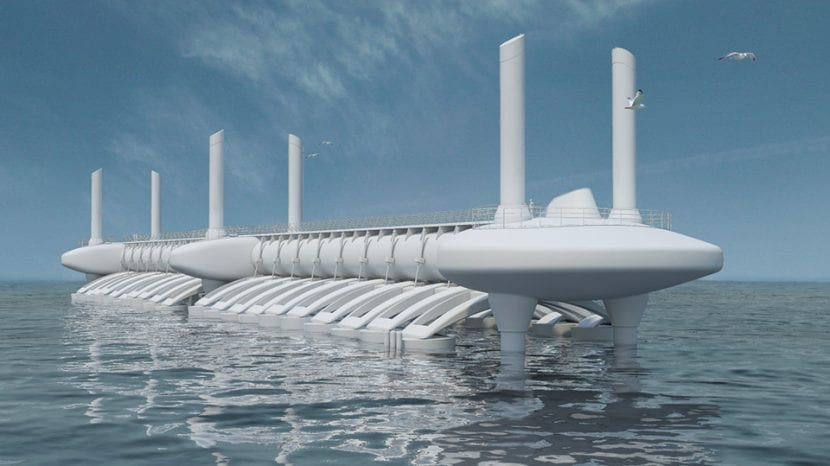 WaveStar project will give wave power, that is, energy generated by the movement of the waves (if you want to obtain more information about this type of energy you can see "Differences between tidal and wave energy") in an uninterrupted manner.

Do you know of any case in which someone outside of any company has a brilliant idea and is left in nothing due to lack of resources or in the best case a company buys the idea?

Well this is what happened, two brothers who love sailing they insisted on taking advantage of the “powerful forces under the sea” as they quote and gave rise to WaveStar.

This pioneering initiative It is capable of generating wave energy without interruption. Also part of the advantage that it does it with resistances never seen before before weather adversities which, after all, is one of the main problems facing obtaining and using this renewable energy.

The Hensen brothers (Niels and Keld Hensen) had that spark, that brilliant idea which, after 10 years of research, WaveStar was born, responding to the challenge of regularly converting the wave energy capture that occurs each 5 and 10 seconds for the waves.

This is achieved thanks to a system of row submerged buoys that go up and down in turns, making it possible for the getting power don't stop despite the oscillations produced by the waves.

The energy collected by these buoys is transferred to a generator that produces electricity through a hydraulic mechanism.

WaveStar Not only wants achieve the stable wave energy production but also the procedure raises a major advance to the harshest weather conditions as I have commented previously.

This is mainly based on the structure safety, which are equipped with an anti-storm system thus guaranteeing the maintenance of the equipment.

The company dedicated to this project bought the rights from the idea of ​​the Hensen brothers who work as consultants supporting the project.

This company points out that, "The energy of the waves will play a fundamental role in ensuring the energy of the future, but only the machines that can withstand the toughest storms will be able to survive."

On the other hand, WaveStar will not only stay here but aims to lay the groundwork for true energy parks and thus take advantage of different sources of renewable energy.

Laurent Marquis, Technical Manager says, "It can be wind and waves, but also solar energy… ”, and sees the goal of a project in the“ construction of the first parks in which the systems for capturing energy from the sea are located around wind turbines. If the waves and the wind come together, everyone wins ”.

WaveStar for now you are rebuilding the system for an upgrade and increasing the number of floats / buoys after years measuring results of the proposal to increase the capture of wave energy.

Likewise, the company has asked the European Union your support through the program 2020 Horizon with the aim of building the first large-scale prototype.

For the same purpose, a consortium has been established in which the University of Cantabria among other institutions.

"We are prepared to build a large-scale system," says Marquis, who sees the sum of different sources of sustainable energy as the energy response of the future. “We need to learn from each other. Instead of competing, we have to be together building a promising new concept for the future. "

To finish I leave you a very short video, about 40 seconds, where they explain in a summarized way the operation (in English) at the same time that you can observe the buoys and all the WaveStar equipment.

If this project goes ahead and is built on a large scale adding other renewable energies such as wind and even solar, it can be said that obtaining alternative energies will be able, not only with this project but with many more, to supply a percentage of the very high population.

From here I thank all those people who have these wonderful ideas that make it possible for us to have a better future and be more independent from fossil fuels.