But as the wind becomes electricity? The direct antecedent of the current wind turbines are the old mills, which even today are still used, for various tasks such as extracting water or grinding grain. A Windmill It is a machine that has blades or blades attached to a common shaft, which begins to rotate when the wind blows.

This rotating shaft is linked to different types of machinery, for example machinery for grinding grain, pumping water or generate electricity.

To get electricity, the movement of the blades drives an electrical generator (an alternator or a dynamo) that converts the mechanical energy of rotation in electrical power. Electricity can be stored in batteries or sent directly to the grid. The operation is quite simple, what is getting complicated is the investigation and construction of wind turbines increasingly efficient.

A windmill can be of horizontal axis, which are the most common today, or there are also vertical axis.

From Wikipedia the definition of vertical wind turbines or horizontal as an electric generator running converting the kinetic energy of the wind in mechanical energy and through a wind turbine in electrical energy.

Those with a vertical axis stand out for not needing the orientation mechanism and what is the electric generator can be arranged on the ground. On the other hand, those with a horizontal axis, allow to cover a wide range from small power isolated applications to installations in large wind farms.

As mentioned, vertical or vertical axis wind turbines do not need an orientation mechanism, and what would be the electric generator can be found located on the ground.

Su energy production is lower and it has some small handicaps like it needs to be motorized to get going.

There are three types of vertical wind turbines as are Savonius, Giromill and Darrrieus.

One of the most common problems wind turbines is its immense size, in addition to the vibrations and noise they cause. For this reason, they are usually located in areas far from homes. However, companies and scientists around the world continue to work to build smaller turbines (You can consult an article previously made on mini wind power), o silent that can be located in urban areas.

But one of the problems that most worries in the field of the generation of the wind power It is the variability of the source, that is, of the wind. The turbines In general, they are prepared to function optimally when the wind blows within a certain speed range. On the one hand, a certain minimum speed is required to move the blades, on the other hand there is also a maximum limit.

There are thousands of wind farms full of models TEEH (horizontal axis wind turbines). These machines are made up of the following segments.

Tower and foundation: The tower foundations can be flat or deep, guaranteeing in both cases the stability of the wind turbine, the fastening of the nacelle and the motor blades. The foundation must also absorb the thrusts caused by the variation and power of the wind.

The towers can be of different types depending on their characteristics:

Rotor: The rotor is the "heart" of every windmill, as it supports the turbine blades, moving them mechanically and rotationally to transform the thrust of the wind into energy.

Gondola: It is the most visible head of the wind turbine, the helmet that hides and maintains all the turbine machinery. The gondola joins the tower using bearings to be able to follow the direction of the wind.

Multiplier box: In addition to being able to withstand the variations of the wind, the gearbox has the task of coupling the low rotational speeds of the rotor and the high speeds of the generator. As his own word says; manages to multiply the 18-50 rpm generated by the natural movement of the rotor in approximately 1.750 rpm when it leaves the generator.

Brakes: Mechanical brakes are used in the power train, being necessary in them a high coefficient of friction in static and great resistance to compression.

Electrical equipment of a wind turbine or windmill

Today's wind turbines are not only made up of blades and a generator to bring cheap energy to homes. Wind turbines must also have a individual power supply system and numerous sensors. The latter manage to monitor and measure the temperature, the direction of the wind, its speed and other parameters that may appear inside the gondola or in the surroundings.

Advantages of fast wind turbines compared to slow ones

The greatest advantage of the so-called "slow wind turbines" is that they have more blades that rapids and their materials are usually cheaper. But what are your problems? Despite their large diameters (from 40 to 90 m high) and having rotors whose heads reach 100 m, wind turbines fast are lighter than the slow ones.

This is achieved thanks to high-power generators (0,5 to 3 MW) that take even more advantage of the height-power ratio of the wind.

Being lighter, the blades move faster, so the size and multiplier box cost that drives the electric generator is reduced. 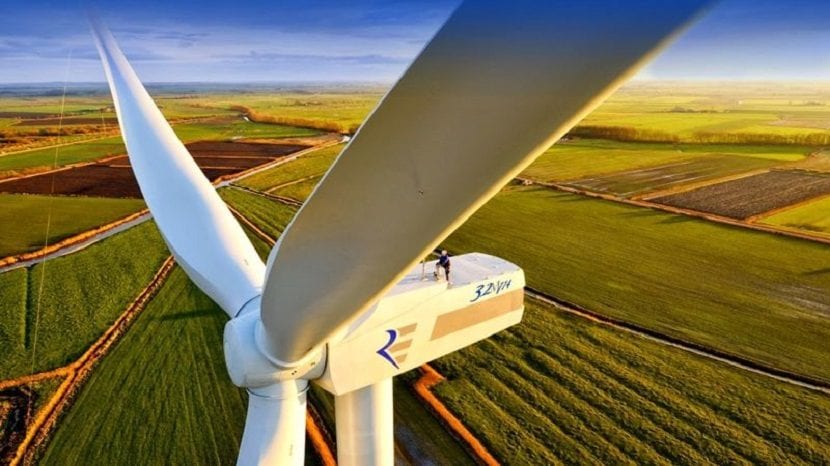 By having fewer blades, these can be adjusted more easily to adapt their power according to the characteristics of the wind. Fast wind turbines are better resistant to stresses caused by wind gusts. The axial thrust due to the action of the wind on the stationary rotor is less in fast wind turbines than when it is turning; the opposite happens in the slow wind turbines.

The most powerful windmill in the world

Vestas has presented the update of the largest wind turbine in the world. I have no adjectives to describe how huge this turbine is. The V164, a 220 meter windmill with 38-ton, 80-meter long blades, has just focused all the attention of those interested in renewables in Denmark.

The previous turbine was capable of delivering a power of 8 MW, and thanks to the updates it is now capable of reaching up to 9 MW output under specific conditions. In its first test, the V164 was capable of generating 216.000 kWh in just 24 hours.

Not only is it the absolute record for wind power generation by a single windmill, but it is the clearest demonstration that ocean winds are going to have a key role in the energy transition that is already underway.

Enough to power a home for 66 years

"Our prototype has set another generation record, with 216.000 kWh produced in a 24-hour period. We are confident that this 9 MW wind turbine has proven to be market ready, and we believe it will play a key role in lowering offshore wind energy prices. "

Usually talking about kilowatts is a bit difficult and abstract. But according to official bodies, the average electricity consumption of a Spanish home is 3.250 kWh per year. A quantity slightly higher than the average annual consumption of urban dwellings in the main cities of South America. Taking this into account, in a day of production it could supply electricity to an average house for over 66 years.

Larger than the Torres Kio in Madrid and similar to the Torre Mayor in Mexico, their circumference is larger than the metal wheel of the London Eye in London. This turbine it's evolution of the V164-8.0 MW, a wind turbine that already broke records in 2014 and it can power 16.000 British households.

Full path to article: Green Renewables » Renewable Energy » How does a wind turbine or windmill work?